Purchase at our Secure Online Store

Read this thread from the Fender Forum!! 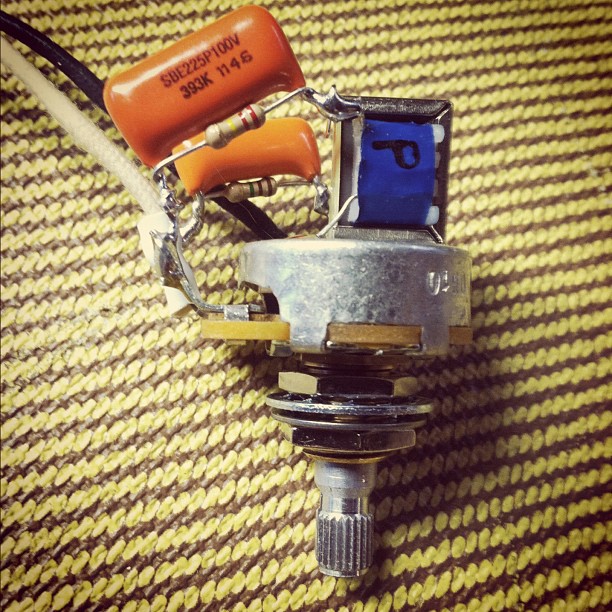 We have been building midrange controls since the year 2000 and they have been used by thousands of guitarists worldwide, ranging fromtouring pros to weekend warriors. I'm not a big believer in tinkering just for the sake of it. I've seen many guitar mods that sound great on paper, but when put into practice become just plain silly. Often they are too complex and the player is left scratching their head and fumbling around for useful sounds at a gig. My whole philosophy about wiring mods is based on one premise: THE MODIFICATION SHOULD BE INTUITIVE AND ADD REAL VALUE FOR LIVE PLAYING SITUATIONS.

Midrange boost/cut WOW!!! I used the strat 5 way switch with master volume, tone, and orange midrange. I added a sub-mini toggle, on-off-on, wired in place of a blender pot on neck pup. I also added a .0068 cap across the toggle on posts, so I can add the neck pup straight or half out of phase. Ten pup combos plus three master controls.

Your midrange control was much more versatile than I imagined. I was able to make the Holy Grails very hot. Great work.

I just installed your midrange control into my 2000 Fender American Deluxe Fat Strat. All I can say is WOW!!!

After playing the guitar for almost 40 years and owning dozens of electrics with dysfunctional tone controls, I feel like I have found the holy grail of tone.

I am so impressed with the system that I would like to install one in my Tele.

I've had the "Orange tone shaper" in my Strat for a couple of weeks now, and I'm impressed with it. It does add some nice tonal options, and I found it really worked well to add some of the nuances I felt was lacking in the noiseless pickups. It's also been helpfull when using digital amp models and effects that can have a notched frequency response.
I'll be ordering again from you.

Hey Andy...
I just finished my new wiring setup for my Strat Plus Deluxe. I'm using Lollar Blondes with a master volume, master tone, and your midrange shaper, also with a neck-on switch. The new pickups sure made a difference, but man...the control I now over my tone using your shaper is unreal!!!! I can dial in exactly the sound I want. Like your note mentioned, a setting around 2-3 is perfect. I've found that when I kick in the TS-9, small adjustments in the shaper let me get "the sound" easily. Anyways, thanks... easily the best $25 I've spent on my set up.

I got my pot yesterday, installed it into my Tele and played with it for about an hour.

I noticed that when I rolled the mid shaper to about 1-2 I got those sparkly cleans that I was hoping for. I also found that when wide open, at 10, I sensed a very slight break up in a very good way which far exceeded my expectations! Overall, based on what I heard last night, for the semi-aggressive blues/country/southern rock styles I play, this thing is really nice. My main guitar is this heavily modded Fat Tele and this is a very welcome addition. I think the 9-10 setting will really help out on leads. And I was surprised to notice a decent push on the mids even with the full neck HB. Rolled off is nice too. I think it'll make clean rhythms sound really nice. I didn't run it with a chorus last night, but I suspect the sparkle at about 2 will be awesome with it.

Wanted to say thank you for the two midrange/tone switches and for the questions you answered for me. The switches work wonderfully with lace sensor golds, and using one for the neck and one for the mid and neck tones. Killer tone on a killer Custom!!

Thanks so much,
Andy
AE Custom Guitars 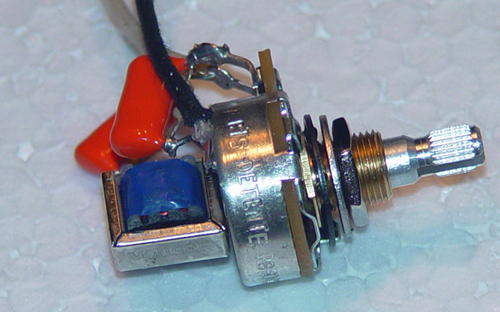