A common problem you may have noticed is that as you rotate your guitar's volume pot counterclockwise towards zero, an unwanted side effect is that you lose high end along with the volume. The solution commonly used to remedy this situation is to employ a treble bleed mod (aka volume kit). If your main goal is learn how to wire one, just look at the diagram above and you are done. However, if your goal is to understand how it works at a deeper level, then read on.

WHAT CAUSES THE LOSS OF HIGH END?

The loss of high end experienced when you roll down your guitar's volume is due to the fact that the pickups interact with the volume pot, along with the capacitance of your cables to form a low pass filter.

The main point to notice about the formula above is that both R and C are inversely related to the cutoff frequency. In other words, as either R (resistance) or C (capacitance) go up, the cutoff frequency goes down. With the volume control up on 10, pot resistance (R) is extremely low, so the cutoff frequency is very high, therefore the only frequencies being blocked by the filter circuit are very high and do not have much of any audible effect on tone. Now, as you rotate the pot counterclockwise to turn down your volume, you are raising the resistance, so the filter cutoff frequency moves down into the audible range (remember that inverse relationship) and you start to hear the loss of high end.

A solution is to take advantage of an opposite type of filter, namely a high pass filter.

In a guitar circuit, the mod would be implemented as follows using a small value cap usually ranging between 680 pf and 1000 pf.

THE SOLUTION INTRODUCES A NEW PROBLEM

The mod works great, however there is a catch (isn't there always!!!). You will find that the guitar might become progressively too bright for your tastes as you lower the volume pot (counterclockwise). The reason for this phenomenon will hopefully become evident as you look at the next 2 images in order which show the state of affairs starting with the volume on max, followed by the volume on 5.

VOLUME ON 10 - when the volume is maxed out, the cap is shorted out since there is zero resistance between lugs 2 and 3 on the pot. 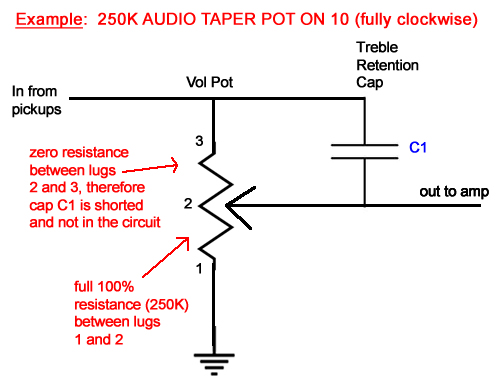 VOLUME ON 5 - The assumption here is that you are using an audio taper pot (aka log taper). With a audio taper pot, there is 10% resistance at 50% rotation, unlike a linear taper pot which is 50% resistance at 50% rotation. This is a whole other topic in and of itself, which I won't get into here, but lets all agree that the vast majority of volume pots are audio taper, as the general consensus is this produces results most pleasing to the human ear. Back to the issue at hand, when the pot is centered on 5 (that is 50% rotation) we have 10% resistance, so given the typical 250K volume pot, we would have 25K resistance on one side and 225K on the other Take a look at what happens in the image below. When the pot is on 5, you will see the cutoff frequency is at approximately 6.3 KHz. We will be rolling off frequencies below this, and retaing frequencies above it. Most folks generally consider the upper midrange to be in the 2.6khz-5.2khz range and high end to be 5.2khz and higher. You can see by rolling off only frequencies from the upper midrange down things might get just a bit too bright. 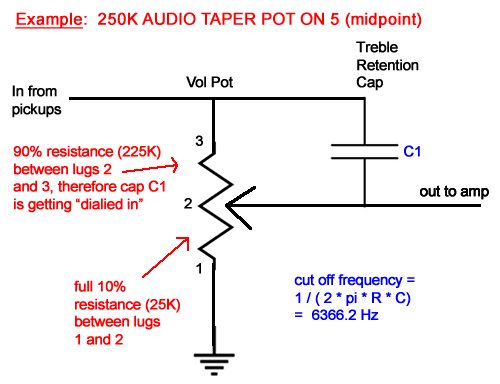 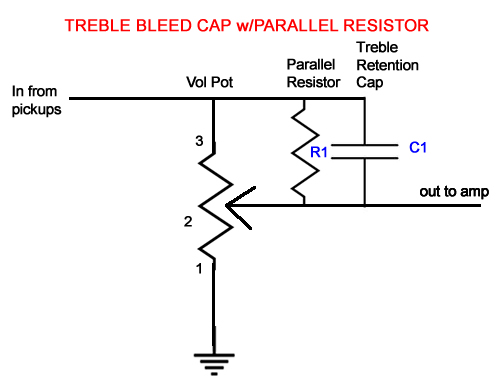 If however, you select a larger value resistor (lets say 220K) in this same example, the resulting resistance at 50% rotation will be a bit higher at 111K therefore having less of an effect on the taper. I wouldn't view any of this as a bad thing, because if you select an appropriate value resistor the taper should still sound pleasing to the ear. I also wouldn't get too hung up on the math too much. You might want to try out a few different resistor values in the right ballpark (50% to 90% of pot value) and let your ears decide. Better yet, if you use a trim pot instead of a fixed resistor you can dial in the value that sounds best to your ears. I like the Bourns trimpots which you can get from Mouser Electronics.